Victory over Storms in our Lives!

Wow, I love how God works! William and I spent some awesome time in the Word Tues. and Wed., mostly in the minor prophets. God wants us to do a thorough study of Hosea and the other prophets of that time period. Also, God has been speaking to William and has been telling him some incredible things. There are so many parallels to today and the USA that it is uncanny! We (the USA, esp. leadership) are under judgment and big time bad stuff is coming VERY soon and we as a nation are about to have our world turned upside-down … God has been trying to call us to repentance for years, but people want to be on their downward destruction path.  But before the 'big-time bad stuff', God is pouring out His Spirit in a BIG way and the biggest revival is about to hit this country!
We are to spend the next 5 months really studying God’s Word, getting closer to Him than ever before. What is coming next spring is big – we are to get out there and really preach – William has to psych himself up big time because he believes he will be arrested and beat up for preaching the gospel. It is finally coming to that, we’ve known it all along.
Yesterday, we left Coquille around 7 am and headed for Crescent City since I had been asked months ago to speak at a Women’s meeting at the Cornerstone Church there. We left so early because a major storm was to hit (actually, it started raining in buckets late the night before) with winds at 80 mph around 11 am. As it turned out, we drove in a lot of winds; however, we could tell we were right ahead of the storm. We stopped for breakfast in Gold Beach and when we hit the road again, the winds were doubled. We got to Crescent City about 10:30 and the storm had followed us. Throughout the day, it increased and last night, it was massively huge and awesome. Mom even called me and said that the news was calling it even bigger than the ’64 flooding (which I remember in Ashland) and it was to affect the whole of southern Oregon/Northern CA. Should be interesting traveling to the Rogue Valley after leaving here!
We roamed a bit/went out to lunch before heading to the mission. We hung out there for awhile and Daphne showed up and I went with her – to her house, then to the church to set up for the 6pm meeting, while William stayed at the mission. I had been seeking God for some time now as to what He wanted me to speak on and at this point, I still didn’t know what scripture to base it on. The theme was Tie-die and I was trying to come up with something; yet at the same time, wait on God to show me what he wanted me to say.
At this point, the storm was so intense, winds had to be over 60 mph at this point. Only about 15 women showed to the meeting. Daphne prayed over me (as did Catherine) and Daphne said that the Spirit of God was all over me so don’t worry about what I was to speak about, God would give it to me. I wasn’t that worried, I knew God would, it was just a little unnerving. I was struck by Haggai (I had turned right to it when I was talking to God) esp. vs 5-11. Sure enough, when I got up, I spoke of several related things ending with the fact that God wants obedience and repentance and that it must start within the church. I told them that our world was about to be rocked and we had to be ready to be that light to those who were going to be out there freaking out. Since I had not put a mark into Haggai, I kept trying to find it while I was talking, so I mentioned how God’s glory has left the temple and we needed to be obedient and repentant to see God come back. In other words, the Holy Spirit – the church tends to ‘work up the Spirit’ and say he is present, when all the while he is not. I kept bring up the parallels of the minor prophets to our time now and instead of looking to the future with fear, we are to see it in faith, that we are in line with God’s will and that as we rise up in faith and be that light, God will guide us through. All through the talk I kept trying to find Haggai again and finally Catherine grabbed my bible and found it for me, but by then I didn’t feel drawn to share those verses. It was rather funny, because I never actually ‘read’ the Word, just gave the message.

Anyway, Daphne said it was exactly what everyone needed to hear. After I was done speaking a hot flash hit me real hard, had me sweating and shaking. I was sitting there and all the people gathered around me to pray and I felt great (but drenched in sweat). After that, I had a chill hit me that just wouldn’t leave. After leaving there, we went to the mission to check on things, since the doors were open for the homeless to spend the night. As I was walking into the door, one of the people were outside smoking and he looks at me and said, “I don’t know who you are but God is all over you.” I just smiled at him and said hi and went in. The place was packed with people, beds laying out everywhere, general chaos, but happy. William was all fired up and talking with the people – he said he was having a great time.
Later that night, Daphne and I were talking about many things; she mentioned how she believed that because of my past, I have a special anointing against the spirit of depression, that spirit could not stay around because of it (I have noticed that – it must have grown over the year because no matter what, I haven’t felt that depression try to take me over in well over a year now.) She believes that as God presents the opportunity to me, I pray over people and it will leave.
William had an incredible time spending the night at the mission – he said that he ministered to so many people there (19 came to stay because of the storm + the 8 disciples, 2 leaders, and him) – full house! There is such a need for mature Christian men to step up and disciple the people there, including the leaders! William and Jasper even had to get up on the trailer parked there at 1 in the morning to tie a tarp down on it since it was leaking so bad (since a couple lives in there).

Posted by Roberta Hayes at 1:04 PM No comments:

Email ThisBlogThis!Share to TwitterShare to FacebookShare to Pinterest
Labels: storms 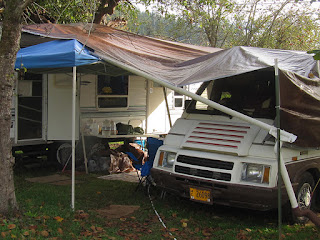 Oct. 11 – because of all the “God Highs” lately, of course the enemy had to attack. Sunday night I had to take William to the emergency room because he has walking pneumonia! And of course, the Dr. couldn’t just take the word of a patient and had to ‘educate’ William on all he knew about asthma etc and etc. William was obviously in pain, knew what he was talking about, but he just played the Dr. out until he got what he wanted in the first place: antibiotic and predneszone for his chest. The effect was almost immediate, with William actually able to sleep the night through for the first time in 3 weeks, didn’t hack up a lung constantly, etc, which of course, gave him the energy he needed the next day and ability to breath! Like he said, no wonder he’d gone through 2 inhailers this past month and was taking 8 treatments a day on his machine. He just needed that swelling to go down.
I hadn’t been able to sleep the past 3 nights due to back to back hot flashes all night long! Headaches and nausea. We went out to breakfast today and I couldn’t even keep it down! My body is all messed up from menopause; however, this is over the top!
Posted by Roberta Hayes at 1:12 PM No comments: