Wow, I am amazed and enthralled by the works of God!  I’m constantly blown away by God’s hand on this place and His provisions!  Just this week alone, His provisions for the rent and insurance!  Coming into this week, God kept saying not to worry, that He would take care of everything, and no matter how hard I tried, I had that small voice of doubt that kept creeping in, and I would chase it away again, KNOWING God would provide.  Human reasoning kept coming in – prior to this week, I knew I was getting at least $300 from Taylor, but I didn’t expect anything from IWU, I kept trying to reason in my mind how God was going to come up with what we needed.  So, on Tues. I was able to get online with Taylor and find that I was getting $322. AND on Thurs. I got online with IWU and found I was getting $286!  That was a surprise!  So, between what I had placed in my business account from sales and all of that, I paid the rent, the insurance AND had a few $$ left over.  We have everything we need, so why do I ever fret and try to figure?!  Will I ever learn!  I do pray and hope so, that I ALWAYS KNOW that God provides all that we need!

What’s even more amazing is last week – the 19th through the 23rd – we brought in $655. in sales/donations!  The most for a week to date!  Wow, God is really blessing this place.  For the month of Dec. we brought in $1,076., but grand total from Oct/Nov/Dec was $1,727.  That’s totally amazing for a new business and especially, for an art gallery in a town that has none!  What’s even more amazing, is that since Oct., we’ve only had a loss of $4090.33!  Only God could do such a thing!  What’s cool, is that in Oct. I had put in a petition to the Rotery club for $$ to help fund the after school art program.  Last Wed. they gave me $150. for that.  Also, last week, we got a check from the Chamber of Commerce for WINNING the store-front display window contest - $75.  We really worked for that one!  Throughout the month of Dec. we kept adding to and creating of Christmas displays throughout the 4 big windows we have – William found a beautiful, hand painted crèche from the Salvation Army for only $18, so William built a wooden structure (out of the old barn wood found at Elizabeth’s place) that was incredible, complete with a barn loft, stairs leading to, and straw!  Totally cool.  Then he created this hanging light over the top to signify the start – so creative and cool.  The rest of the windows held the awesomely decorated tree (each strand of tinsel hung by William – which Kathy, the Mayor, said was the deciding factor on our window winning!), the animated and lit Santas and caroler, the many little snowmen, the wintery ocean scene with the sculptures, and the window that held the items we sell.  All for a very homey, old-fashioned, store-front display we wanted to capture.


The after school art program ended the year with a successful piñata party.  I had 9 kids start that first week of Dec. making piñatas, and by the last day of decorating them (Dec. 19th), only 4 kids had finished.  We held the party on the 21st, which was a greater success, because we invited extra kids to the party – what was so cool about that was that a lady with 7 kids had been wandering town, killing time until the roller skating at the community building was to start (6 pm), had wandered into my shop about 2 pm.  I invited them to come back at 3:30, which they did.  We had a wonderful evening, complete with breaking my piñata full of candy.  Velma had come over to help as well; quite a successful evening.  What’s even cooler is that we were featured on the front page of the local newspaper this week with the kids’ art program. 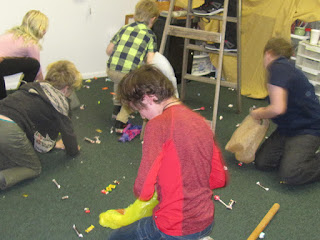 Bethany and I sang/played in church on Sunday – New Horizons – Bethany has been going there on a regular basis, since she arrived in Oct., as well as attending the Monday morning Bible study and Thursday morning prayer meeting with the Foursquare group.  I/we haven’t been as much, since we’re been checking out other fellowships.  Bethany and I have gotten to perform a few times this Christmas season – on the 9th we were asked to perform for some sorority group’s Christmas party at the hospital and that was a hit – plus we got $50 for doing so (which was a surprise)!  Of course, we performed at our open house on Dec. 1st (which got us the gig at the hospital).  Our open house was a great success, not so much in numbers, but by who attended.  Not only that, but on the 12th, while up to my elbows in goo from paper mache and several kids participating in pinata making, our landlord came in and plopped a $50 bill on my table (next to the goo) and said Merry Christmas!  I was very surprised and he is obviously impressed with what we’re doing!

We had the best Christmas season in years, we all agreed.  We have a place to live, God provides all our needs, and we’ve had fun; so much better than in past years.

Something I found interesting last week:  Wed. Dec. 20th I was wondering when I was going to get to join Rotery, because I was wanting to figure out how/when I was going to pay the $200 fee.  I started going to the meetings (pretty much every week) since Kathy invited me in Oct.  I was told to come to 6 meetings, then the board would meet to vote me in.  I went to 9 meetings or so and had asked when I would be allowed to join.  They told me to finish the paper work, which I did with Kathy and then online.  I went to a couple more meetings and asked again, they said I ‘fell between the holiday cracks’ and that that matter would be discussed on the next board meeting.  Well, Wed. morning, the President and Pres. elect came into my shop to discuss membership.  They told me that my membership app was turned down because they “wanted me to come to meetings for the next year in order to get to know me” and that since I was “new to town” they wanted to wait.  I just sat there and nodded, and they said they were “surprised on how well I took the news.”  I told them I was fine with not joining them; however, I then filled them in on the fact that I wasn’t new to town, but rather, have been here most of the last 3 years and that sure, my shop was new.  They also informed me that I was invited to continue to attend the meetings, especially today, since they voted to give me $150 for the after school kids program.  I said ok, plus, I had been asked to be the speaker for the Jan. 10th meeting, and I wanted to confirm that with the scheduler.  I remained puzzled; however, by the fact that they ‘changed the rules’ on me – that I was singled out NOT to join.  The first day I went to their meetings in Oct. several people had joined, including Velma, who does not own a store nor has she been here long (they moved here in May).  Since then, several other people started attending meetings and they were voted to join.  I believe, in reality, they didn’t want me in their club because I put “God” in my store sign and that I’m obviously a ‘real’ believer, in that I speak my mind about God/Jesus.  When I told Kathy about their decision, she was even surprised – said that NEVER happens; however, she did make note that she “wouldn’t have tied God in with my business,” and that she was surprised I called it “God’s House of Vision”.  Nonetheless, she didn’t understand, either, why I wasn’t allowed to join.  Anyway, it really doesn’t matter that they act like this, it just confirms that we’re on the right track and that we’re rattling a few cages!  Not only that, but this just confirms what I had been feeling God was telling me, is that he didn’t want me getting involved in their stuff, because He had enough for us to do with His business! 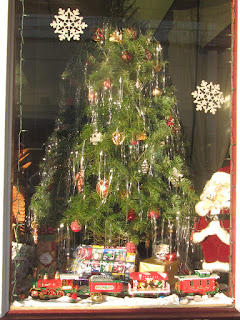 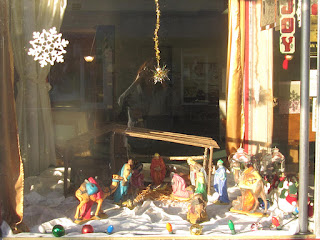 I just finished reading a couple books by David Jeremiah:  The Handwriting on the Wall, Secrets from the Prophecies of Daniel and Escape the Coming Night which was about Revelation.  After reading both, I read both the books of Daniel and Revelation again.  I found both books interesting; however, not new info. except on a few things.  Also, that they were both written in the early 90’s and one updated in 2001; either way, back then he was very ‘immediate’ in the way he discussed the last days – how much more so now that we’re entering 2018!  Almost all of the prophecies about Jesus and the 2nd coming have already happened, so very few are remaining!  What a time to live in.  I found his rendition of the 7 letters to the churches very enlightening from the Escape book.

Posted by Roberta Hayes at 11:50 AM No comments: