Praise and Worship during this time!

Nov. 20 - Wow, a lot has happened in the past couple months.  Before the election, we heard all the prophets for today speak of Trump’s 2nd term, a couple years of unrest, America’s upswing, coming revival, etc.  We believed then and we believe now – God is in Control!  Always has been, always will be.  God is not done with America yet.  I’ve been saying that all along and am still saying it.  Trump will take his 2nd term and will serve it.  Great things for America are yet to come.

The past few weeks, I’ve had various neighbors come to me and discuss the times, but mostly, they need comfort because they are in fear.  They don’t hear the truth like I do (because William searches diligently for it and shares it).  I’ve been saying the same thing for months:  God is still in control – he’s stepping in for a bit of whop-ass – he’s going to be meting out some justice!  Fight for your rights as Americans, say no to stupid!  Speak the truth EVERYWHERE, etc.  We are the forerunners to the next era (a short one) and may have to be martyrs for the cause. We have to be the leaders we were called to be.  There are few of us, and many there are of the scared, those who just need an encouraging word and pointed in the right direction.  We have continued and will continue to be outspoken about the truth of what is going on in this world.  In the end, no matter what – WE WIN!  Jesus is Victor!

I’ve been doing a free (on the internet) study with Dallas Theological Seminary since about the last week of Oct.  The first lesson I went through was Names and Attributes of God by Dr. Scott Harrell; very good, engaging speaker, awesome overview. https://courses.dts.edu/  Anyway, I’ve started I & II Thessalonians (just did the overview and chs 1-3) and it is amazing how absolutely timely it is.  With what is going on in the world, the parallels are astounding; however, even Jesus warned us many times that persecution MUST come! We were destined for persecution – following Jesus will cost you!  We are in a spiritual war!  We MUST engage with the ‘outside’ world and not stayed holed up – we are the witness for TRUTH in all of its forms!

I have found myself the past couple months in constant praise/worship with such powerful music (Shane and Shane, Paul Wilbur, Joshua Aaron, Dance with Me https://www.youtube.com/watch?v=TEt6pEYKvbE, and a bunch of new stuff we found by Messianic Jewish musicians, esp. Teshuva  – so awesome and powerful – I do literally praise and worship all day, dancing around and God told me that is WARFARE!!  I’m praising God and thanking Him for all his victories and declaring what He said He is going to do!!

When you live in perfect faith, there is no fear or worry for what is to come.  God ALWAYS takes care of us – we always have what we need.   No matter our circumstances, the battle belongs to the lord – when we keep that mindset, that vision, then we have no reason to doubt.  The past couple months have been massive warfare for us.  The more we speak out, do God’s will in all things, the more the enemy attacks.  Just since the end of Sept. we’ve had our breaks go completely out on our 20-year old car (God preserved William on the road by telling him just in time to “pull over and call the mechanic”.  We had just had them completely replaced because they were making a lot of noise - roters, calipers, pads, etc) and since William had missed working most of Sept. because of traveling down to the Rogue Valley to put my mom on hospice, his back going out on him, concern for breaks, etc., we didn’t have the money to pay for them, so William’s brother offered!  What a blessing!  Then not a week goes by and the timing belt snapped as William was driving down the street.  We couldn’t afford that, so Max loaned us the money to have it fixed.   What a blessing!  All this time, more work missed because William had no car to drive (and his back was still going in and out on him).  On top of all that, my children and grandchildren (whom I haven’t seen in 4 – 8 years) flew out to Oregon to visit my mom (only 3 hours away) and I couldn’t go see them due to not having a car!  Then, no sooner we get that fixed and now into November, somehow our windshield split down the middle with spiders going every which way!  Then, last week, my half-sister died.

The point is not the circumstances, but praising God and growing in Faith throughout the onslaught, and still witnessing!  We were destined for persecution!  And next week, we have another funeral to attend … 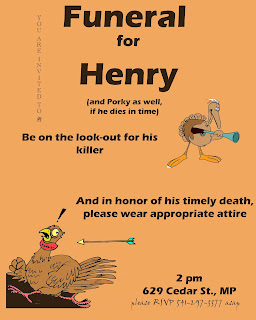