We had been in the Rogue Valley since Dec. 20th – the day William’s back went out on him (even though he went to the chiropractor 6x and it is still out), and the day after his mother died. Today, we had a most wonderful AND awful homecoming (back to Coquille): first off, it rained (heavily) snow/rain most of the route home except just before Myrtle Point – the sun came out so brightly, sparkling everything, including the ‘winter lakes’ which were huge! Then as we came around the corner, we saw the most vivid, huge rainbow ever, the entire thing from one end to the other. It stayed in front of us most of the way to Coquille and we were praising God, thanking Him for His beauty (we had spent the entire ride home singing and praising God). The valley was so beautiful.
Anyway, we stopped at Colleens for a burger then went home. First we noticed that a huge rip (plus some smaller rips) was in the large (20x30) tarp. Then we found that the canopy that was over the doorway (though anchored down) had obviously suffered heavy wind because there were 2 legs broken/twisted and the pegs were pulled out of the ground. The large rip was right over one of the tables where I stored some of my artwork/supplies, bags of art books/stuff, sewing box, etc. They were all soaked (even though I had plastic wrap under and around, the wind must have blown it about quite a bit. Then, we found that mice invaded our RV!!!! I noticed that we were grinding in their poop into the carpet! I was horrified! They ate a hole in my new curtains, mousie dung all over the RV, wet all over the seat!!!! They had eaten all my sweet potatoes!!! Then we came into the larger trailer (24’ one that Elizabeth was letting us use for the winter) and found that the propane heater had been running the entire time (we didn’t know to pull the fuse and because it had been below 55 degrees, it comes on automatically!) It used up all our propane (both tanks now empty and containers now expired – Dec). Good thing God prompted William to ask mom to borrow the propane from her BBQ. The rigs were colder than ice! I floored the little floor heater, William hooked up the new propane and we had it warm in no time. The outhouse was clean – that’s good  All in all, worse things could have happened; we were thankful that they didn’t, but bothered nonetheless by what we did find. Either way, I’m glad to be back! Inside Elizabeth’s house (we’ve been caretaking her property all winter), all was fine, except that most of her plants were dead. That’s not surprising because it got down to the teens during this past few weeks and there was no heat in that house.
Even though William was laid up most of the 3 weeks we were in the valley, God was really with and working in William about several things (he met with and ministered to a few), we had some good bible study times/prayer times/listening to sermon times. I’m glad to be home again and we are going to get back into discipline – get back into regular study/listening/prayer times as well as exercise times! 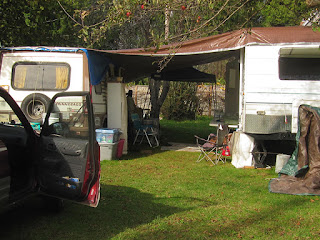 Email ThisBlogThis!Share to TwitterShare to FacebookShare to Pinterest
Labels: mice