Wow! What a morning! God showed up in such a powerful way, it was amazing! Since we had gone to a new church yesterday to check it out, then spent the day fasting/praying/reading the Word, God had me go to Figaro’s this morning to join these ladies I had met yesterday in their weekly prayer/discipleship group. At first there were only 3 there, the leader and 2 others. When I got there, I introduced myself (they had recognized me from church yesterday) and I gave a brief overview of what we do (as missionaries to America) and how we live, etc. She asked me if I knew Betty Denny from the Rogue Valley (since I had mentioned that we’ve been called back to the valley) and I said, “Yes! In fact, I just saw her on Facebook yesterday advertising her new I-5 campaign, inviting everyone on Sat. for it) and the leader said she and another from their church had gone there for it. Anyway, the morning continued and when the lady beside me spoke, she immediately got my attention, not only that she was downcast (eyes, obvious look of someone who had had a rough life/been abused, etc) and 1 of the things she said toward the end of sharing was, “My insecurity ….”. I immediately caught that and I knew God had something for her. I was asked to share next and I said, “Can I speak a word to you from God.” And she said yes. I gave a brief overview of what 45 years of abuse had taught me to think nothing of myself, such an inferiority complex, very insecure, couldn’t look anyone in the eyes, etc. then my path of healing/overcoming by way of writing key scriptures on 3x5 cards, speaking out loud God’s truth (not speaking “my sickness, my insecurity, etc. which equate the devil's lies) over my life, etc. Also telling her even though I had been in church 40 years, going to every bible study, prayer group, etc. that until I got that truth of speaking life into myself rather than death by way of words, I couldn’t get free. I told her to say, “I’m blessed” every time someone comes to her and asks how she’s doing, etc. It really was a maybe 4 minute overview like that. She seemed to receive it, and we went on with the group. By that time another person joined our group.
As we discussed various things, the leader informed me a bit of the history of the area: past strong unity among the various churches in the area (back in the 90’s I think it was), the isolationist mentality over the Coquille valley because of its landmass, constant rain (thus flooding, cutting people off), and rich people coming into the area to set up mansions/little kingdoms in the woods, etc. She spoke of how recently the pastors (very strong in the Lord and in this unity), were leaving due to being wore out, discouraged, beat up (spiritually), etc. from fighting (in the Spirit) the division and disunity that had been plaguing the area in recent years.

I told them how we had come to this area over and over, speaking prophetically over the area (2009, 2010, Bastendorff/Sunset Bay) and knew that God had something big for this area and how we’ve been drawn over and over to this area, etc. I told them how this was the longest we’ve spent (since last April) in this area and kept trying to connect with various churches in Coos Bay/Coquille area, but kept running into this spirit of deadness, lack of sensing the Spirit, etc., but couldn’t find one we could connect with; and how in 2015 we had a booth and William walked the cross in the parade in the “Gay 90’s” event, and so on. I was just quickly explaining how we kept trying to find a ‘live’ fellowship to connect with and couldn’t. But as soon as we walked into their fellowship yesterday, we felt that God told us, “This is it!” and that God told us to connect and for me/us to start attending the various groups, like this morning. The leader felt prompted to pray over me (and William) and said several things that verified why we were set aside like we had been and why we were there, and that God had his timing for everything.
Anyway, toward the end of our time this morning, I kept feeling that God wanted me to anoint and pray over the lady I was drawn to; I started getting this shaking feeling (that I get when I feel that God is about to do something very powerful if I obey), so I asked if anyone had anointing oil; one did. I put some on my finger, and God said, “more oil”, so I put it on my other fingers, and I felt like God kept saying more oil, so I practically covered my hand and made a comment about what God was saying and that I should just pour it over her head, and she said, “no”. So anyway, just as soon as I put my hand on her head, I started shaking like crazy and crying, saying, “In the name of Jesus,” and I just started saying stuff over her about victory, casting out insecurity, fear, intimidation, etc., and about healing, and all kinds of things just kept coming out for at least 10 minutes. It totally blew me away! I hadn’t felt and did anything like that since that time months ago at the Methodist church in Coos Bay when I had met a lady there. 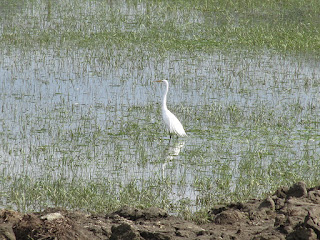 She received it quite well, after I had opened my eyes, I noticed she had her hands open to receive. After that, her countenance looked quite brighter and she wasn’t looking down, but rather up into the eyes of everyone by this point. As we closed up in prayer, she said she wanted to say something over me, that God had told her about us (William and I), and she was right on with everything! Blew me away!
When I got back to the trailer, I told William that I just knew I was supposed to be there this morning and that the enemy was trying to stop me. Last night, 2, and 3 nights ago, both William and I (but William had been going through this every night this week), had been tormented by the enemy and got very little sleep. I was so tempted to just stay in bed and continue sleeping, but I got up at 9:15. I wanted to just sit and rest with my coffee this morning, but God made me get up after only ½ a cup, make my smoothie and go. Even William was surprised, because I didn’t wake up in the greatest of moods. I am so glad I listened to God and went.
Posted by Roberta Hayes at 12:38 PM