June 6th  was Coquille’s Gay 90’s’ Festival (has nothing to do with ‘gays’ but rather, the 1890’s), we set up a ministry booth and William carried the cross through town during the parade.   He was dressed in his white painting overalls, on which I had just finished embroidering “Servant of Jesus Christ” on the back, and his name on the front.  Anyway, he wanted to just be a common working man carrying a cross to give a visual of the verse about carrying our cross daily.  He must of made an impact on the community, because people were talking about him all day (I heard).

I manned the booth most of the day, while William and Scott (a friend from Ashland who had joined us for the parade) wandered around handing out bibles and bible tracts.  I had to put up with the hardest part!  So many people came up to argue with me, give me weird or bad looks, like I was the bad guy!  I had a table full of bibles I was handing out, along with those “Evolution Handbooks” (actually, should be called “Creation Handbooks” since it gives tons of proof FOR creation— http://evolutionfacts.com/Handbook%20TOC.htm).  I had a lot of good conversations, but a ton of arguments and bad comments!   What was even more shocking, was that 4 different people (independent of each other) said that Hitler was a Christian!  Is this what the world thinks Christians are?  This world has really gotten worse!

Anyway, here are excerpts from my Journal, with the days leading up to the event and after:
June 4 – It’s interesting, now that we’re getting ready for this parade/festival in this town, how much God is reminding us of the history of America.  From the 1850’s – 1950’s or so, there was a fight for man’s freedom, for the blacks especially in the South.  Then there was the fight to get God out of the nation and politics – it wasn’t an accident that God put one of His most powerful servants in the White House in the late 1850-s, early 1860’s (Abraham Lincoln).  Then came the full-scale war against the minds of the people - the advent of Darwinism and Evolution – the successful takeover of getting God out of this nation.  Then the fear and hatred of the KKK – to stop men by fear, killing (even whites who stood for justice) all who went against them, thus changing the politics (republicans vs democrats), thus winning the fight – those men took over the power of this nation.  The devil saw this and saw that taking God out of the young had to happen next, because there were still so many who (1930’s-50’s) looked to God for everything (all of which had been instilled from infancy on).  So, 1958-64 was the full-scale war against children, changing of textbooks, educational system, and finally taking God out of school completely.  The ‘spirit’ of the 60’s and all the revolutions all across society - the killing of babies made legal, the killing of the 3 great hopes for restoring this nation to God (Kennedy’s and King), power of women and the weakening of the man, the influx of the Southern mindset (democrats) realizing they couldn’t kill man’s freedom physically, so they took over society by supporting financially all social handouts, looking out for the interests of the minorities, until they’ve bankrupt this country socially and financially.  Where this country centered on God from the beginning, the country who were always sending out missions throughout the world, became the place where nations looked to us as a God-centered world power before, now that has been stripped away, the full course-changed philosophy of this nation and the re-writing of history, fear, hatred, and destruction reign in every aspect of society, making us the laughing stock of all the nations now.  Are we surprised now why judgment must fall?

I’ve been listening to Carmen’s song: “America Again”.  I need to learn that and sing it, or at least play it at every gathering we have.  We have realized through our preparations for this festival, that we are called to do much more than we ever expected at first.  We came to Coquille to work, earn a few $$ to pay off debts, and God has set us up here for a long-term work in all aspects.  We only realized a couple weeks ago that God wanted us to infiltrate this town spiritually in a bigger way, by kicking off our campaign for this town by doing this festival.  Wow, I am always amazed by God.  We don’t set out to plan these things; over and over God ‘sets us up’!  We ‘fall’ into these things clueless!  Then He starts ‘feeding’ us things little by little until we have this whole ‘program’ of sorts.   It’s no accident that the devil attacks us so relentlessly – by my little fit yesterday, by the depressions that keep trying to set into my mind by our ‘hard’ lifestyle.  It is not hard when you compare it to what those in China, India, or N Korea have to go through.  We are quite lazy and whimpy!

June 7 – wow, what a weekend!  The weirdest thing – Friday the 5th, I’m at a printer shop in Myrtle Point, getting prints done for this weekend’s festival, and it was so chaotic in there between my job, and 3 other people’s jobs.  It was a small space to hang in anyway, so I put my open wallet on the counter (because I thought the job was done and I was going to pay for them) and pick up the prints she was handing me so I could approve them or not.  Just then, William comes back in (he had been wandering around the town waiting for me) and he notices she had forgotten to print 3 other items.  I give her the flash drive again and we go over to her computer to find them and print them out.  In the mean time, (I didn’t realize this until later) someone walks off with my wallet.  When it was all said and done after about 45 minutes in the shop, everyone else is gone (their jobs done and taken), I go to pay for the printing, and can’t find my wallet – we tear the place apart looking, and William made the comment, “someone obviously walked off with it.”  Which the owner said, “no, I know all of those people and they wouldn’t steal.”  I find my little stone cross on the floor by the counter and explained how it was in my wallet, so obviously someone picked it up (since it was unzipped) and the cross fell out.  She still maintained, as we continued to look again and again at the same places, while William went to find a bank to get more money out, that no one stole it.

Anyway, as it turned out, the next day, it was stolen and the ‘old’ lady felt guilty the next day and turned herself in at the police station.  Mom had gotten a call from the police earlier that Saturday, asking for me (because my driver’s license gives her address) and somehow the police tracked down her cell number.  She, being wary, didn’t want to give them too much info, told them I was at the coast and they then proceeded to tell her they had my wallet.  She immediately called me, I called them, and by 5 pm, a Myrtle Point cop actually brought my wallet to me personally, at my booth in the festival!  He told of how this lady had showed up at the station that morning, feeling guilty for stealing the wallet, had used $6 something that morning of it, replaced it (because there was $99 in there), and turned herself in.  They felt so bad for her, the chastised her just a bit and sent her on her way, then tracked me down.

What was so amazing about all that was after we left the printers, we prayed about the wallet and specifically said to make the person feel guilty and turn it in!  Wow, I was so amazed that not only was it returned, but all the money was in there.  Here we were spending money for a festival (printing) we weren’t gaining anything by financially, but rather, giving to the community, and God blesses us this way.

But it also chastised me as well – I was sure it was the teenage girl that had stolen it, was talking bad about ‘young people today’ and so on.  In fact, before I had left the print shop, I had asked the owner to call each of the people that had been in there, asking about it.  I could tell she didn’t want to do it, but I was insistent.  Two people didn’t answer and she left messages.  The third was the mother of the girl, and I was silently saying, “yup, she’s going to get in trouble when she gets home.”  When in the end, it ended up being the old lady who was in there.  It showed me how I still ‘judge’ others and shouldn’t. 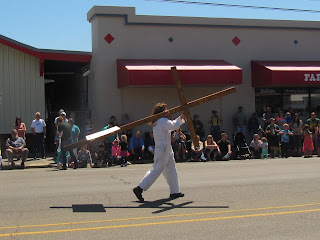 Anyway, the 6th  was the festival; we were so busy setting up the booth Friday night and Saturday morning, then I manned the booth while William walked cross through town during parade, I didn’t have time to call the police and tell them my wallet was stolen.  I heard the coolest thing, this morning when I went to the library to get online (library wasn’t open, but the connection can be made by sitting outside), William sat on the lawn and talked with a father and son who had seen him and I know that was a God-appointed visit! 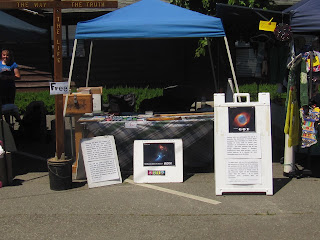 A lot more happened over that year; however, I’m not going to bore everyone with every detail.  Suffice it to say, we had quite a year, ending up in the Rogue Valley again Aug. 29-Jan. 20, where we lived in my mom’s upstairs apartment, ministering to our various family members (lots of serious issues!).   We ended our stay, by connecting with the Jerusalem Center in Medford (where we went to several services the past month) and found the Holy Spirit really working with that congregation.  We look forward to coming back to the valley and working with them some more.
Posted by Roberta Hayes at 3:52 PM